Five years have passed since President Hassan Rouhani first took office. The status of his (and his cabinet’s) 100 promises on Rouhani Meter paints a clear picture of his performance up until now.

Rouhani Meter’s most recent updates indicate that more than half of the promises have not been fulfilled. 10% have been rated “Inactive”, 10% are “Stalled” and 33% are rated “Not Achieved”.

Approximately 30% are successful promises and those with partial achievements: 20 promises have been rated “Achieved” and 10 as “Compromised”.

17 promises are currently rated “In Progress”. However if the past year is of any indication, we should expect more promises to be colored red, indicating that they are “Not Achieved”.

These numbers clearly indicate that many developments have occurred over this past year.

Perhaps the greatest shifts have occurred in the Economy and Foreign Policy categories, the same set of promises that were once considered Rouhani’s strength during his first term and arguably most responsible for his victory in the 2017 presidential elections.

Last year, among the economic promises listed on Rouhani Meter, there were no promises rated “Not Achieved”. However, within a year, a third of those promises have been coloured red (indicating their failure) on the website.

Under Foreign Policy, two promises that were previously “Achieved” have seen their ratings lowered. Under the Socio-cultural category, three promises were added to the category’s “Not Achieved” promises. 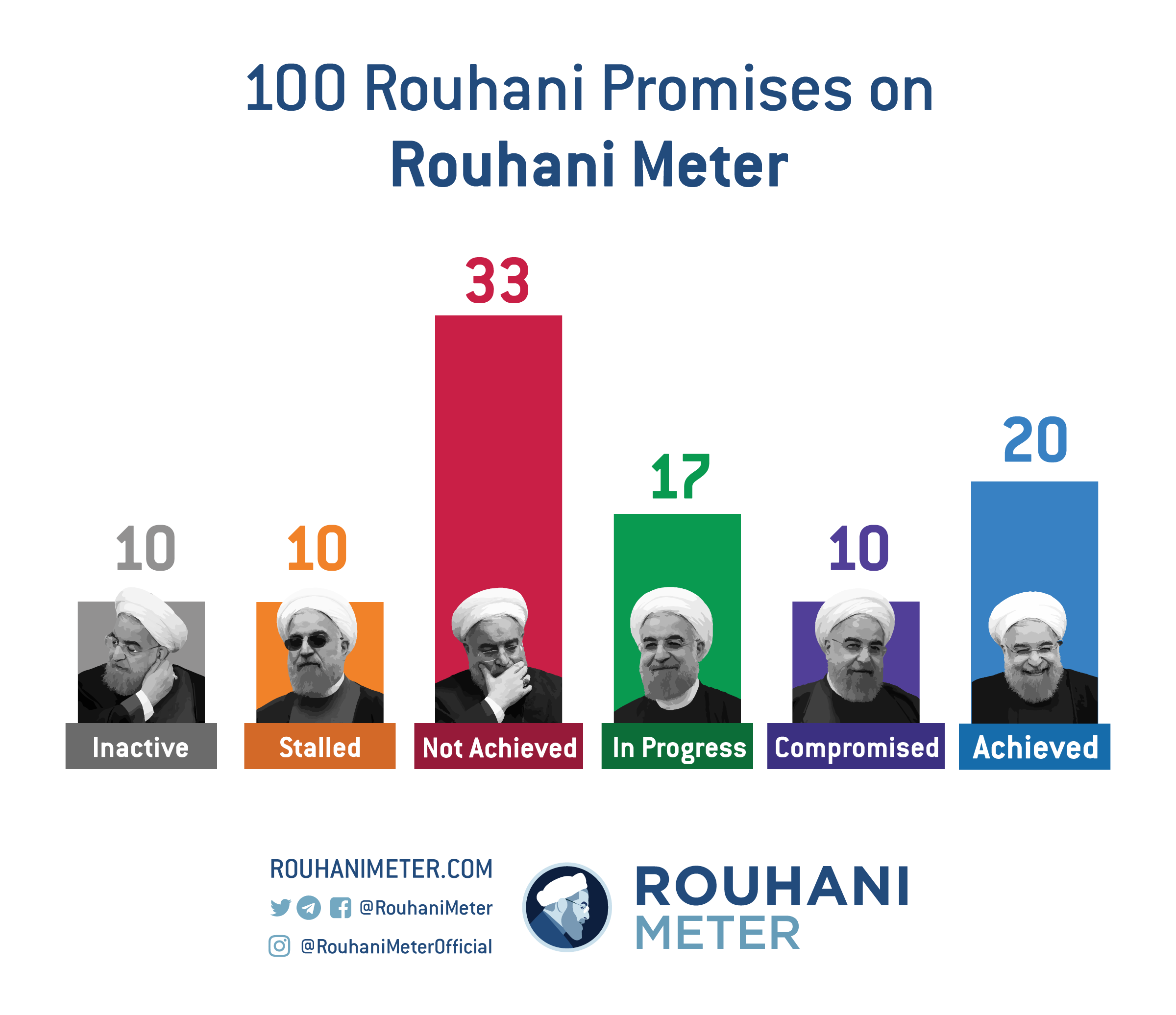 What are the reasons for Rouhani’s worsening report card?

A year ago, while running for the second time, many of his supporters considered Rouhani’s foreign policy achievements among his strengths and were looking forward to further positive results. Although his first administration’s foreign policy record was not without its flaws, the diplomatic accomplishments that led to the JCPOA overshadowed the shortcomings.

However, it’s hard to find much optimism now. The USA’s exit from the Iran Deal, the new round of sanctions, heightened tension between Iran and Arab nations in the region, and not to mention the situation in Iraq and Syria are among the challenges Rouhani has had to manage, challenges that will surely have a negative impact domestically as well.

A major issue in this regard is that Rouhani and his cabinet do not have much say in Iran’s regional policies. This includes negotiating with the US or even with European countries in order to reach an agreement, both of which are not completely in the hands of the administration. In other words, although the Supreme Leader has final say on these matters, President Rouhani’s government is often held accountable.

In Economy, the optimism caused by the Iran Deal was quickly replaced by a sense of hopelessness. The first signs of economic crisis appeared during the Fall 2017, when the value of Iran’s currency started to plummet. To many, the currency market is how one might assess the economy.

The malaise in the country’s economy has worsened since last year and has spread to all sectors, from production to employment and inflation, all the way to politics.

But why is Iran’s recovering economy finding itself in its current dire situation within just a year?

A combination of political and social instability (domestic public discontent and the breakdown of the nuclear deal) and of course, the decline of the country’s economy has played a role. Part of the current challenges are the outcome of worsening conditions as a result of various economic crises.

The banking system is at a deadend, liquidity is saturated and no one seems to be able to manage this. Inflation is officially at single digits, but in reality, it seems like a lost cause which the government seems incapable of managing, nor can they alleviate the unemployment crisis.

Over the past year, public discontent towards economic, political and social challenges has been obvious, which resulted in widespread protests last winter.

Unlike economy and foreign policy, which has long been regarded as the government’s main priorities and accomplishments, few people have regarded Rouhani’s domestic policies and socio-cultural promises with optimism. However, it’s worth mentioning that some of the promises in these two categories played a major role in attracting voters, such as his promise to end the house arrest of opposition leaders and those regarding women and minority rights.

The administration’s failure to address many of these demands has caused disappointment and alienated many supporters.

The unfolding Iran-USA confrontation will most likely have a domestic impact as well. Its continuation might result in the further erosion of hope for major reforms. 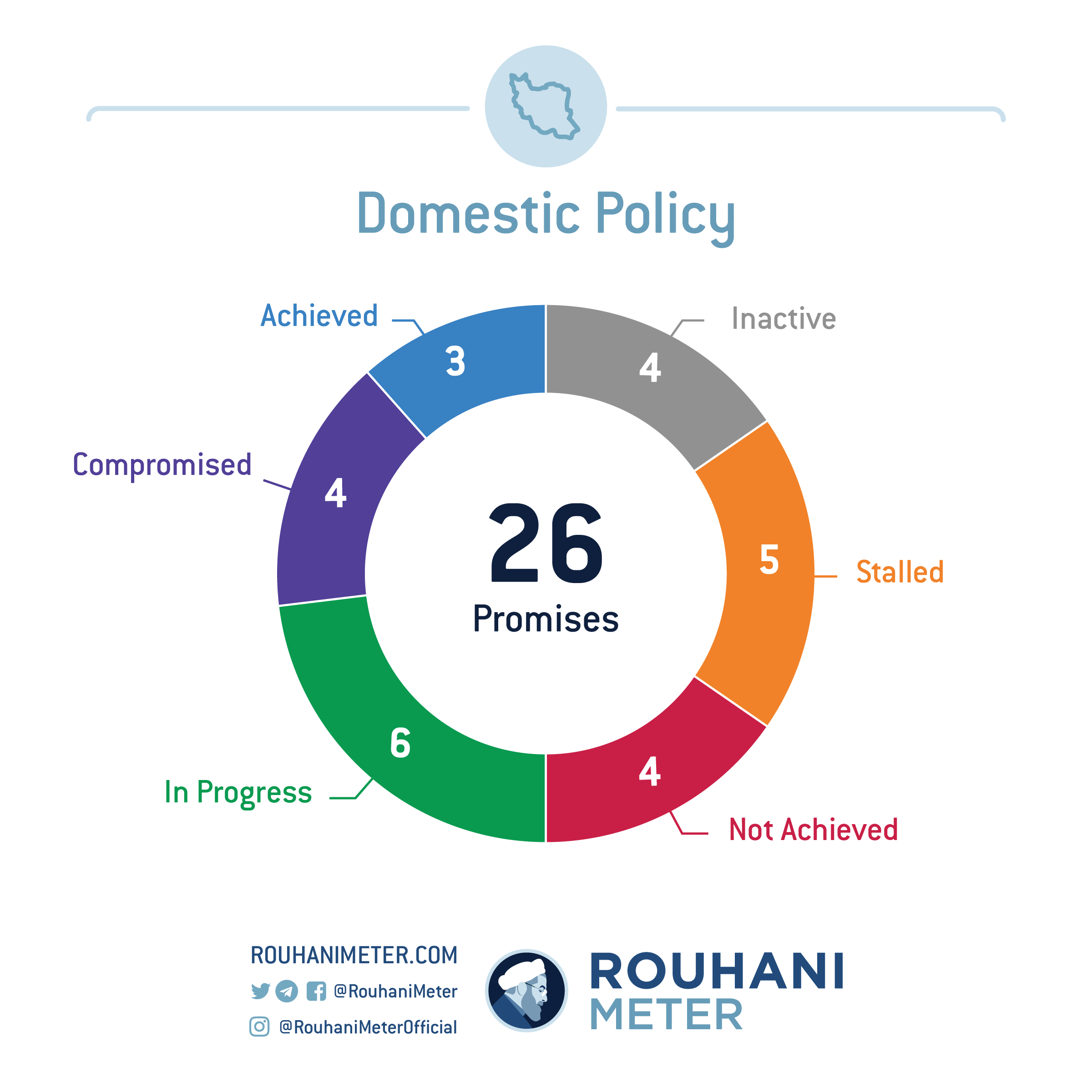 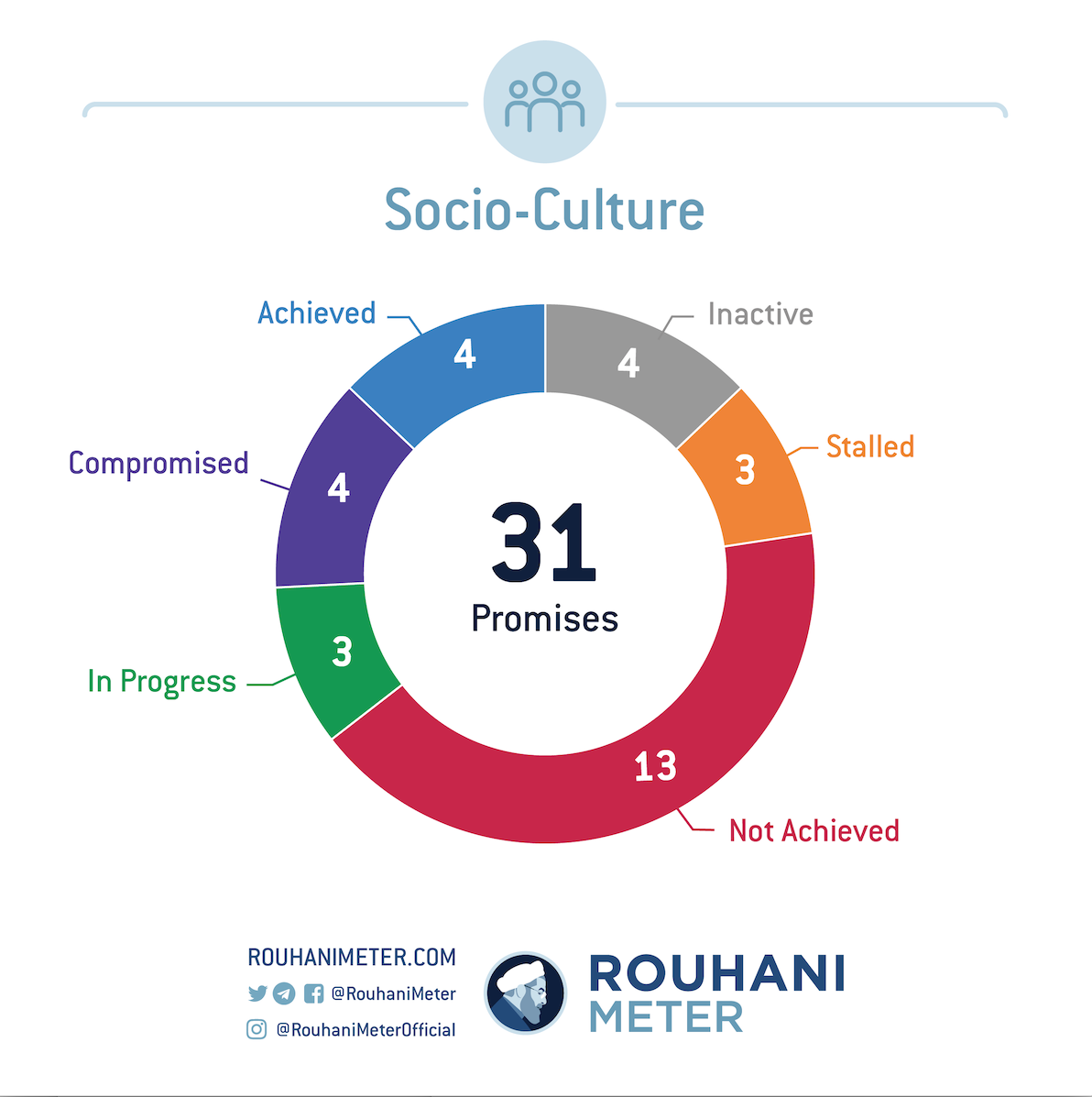 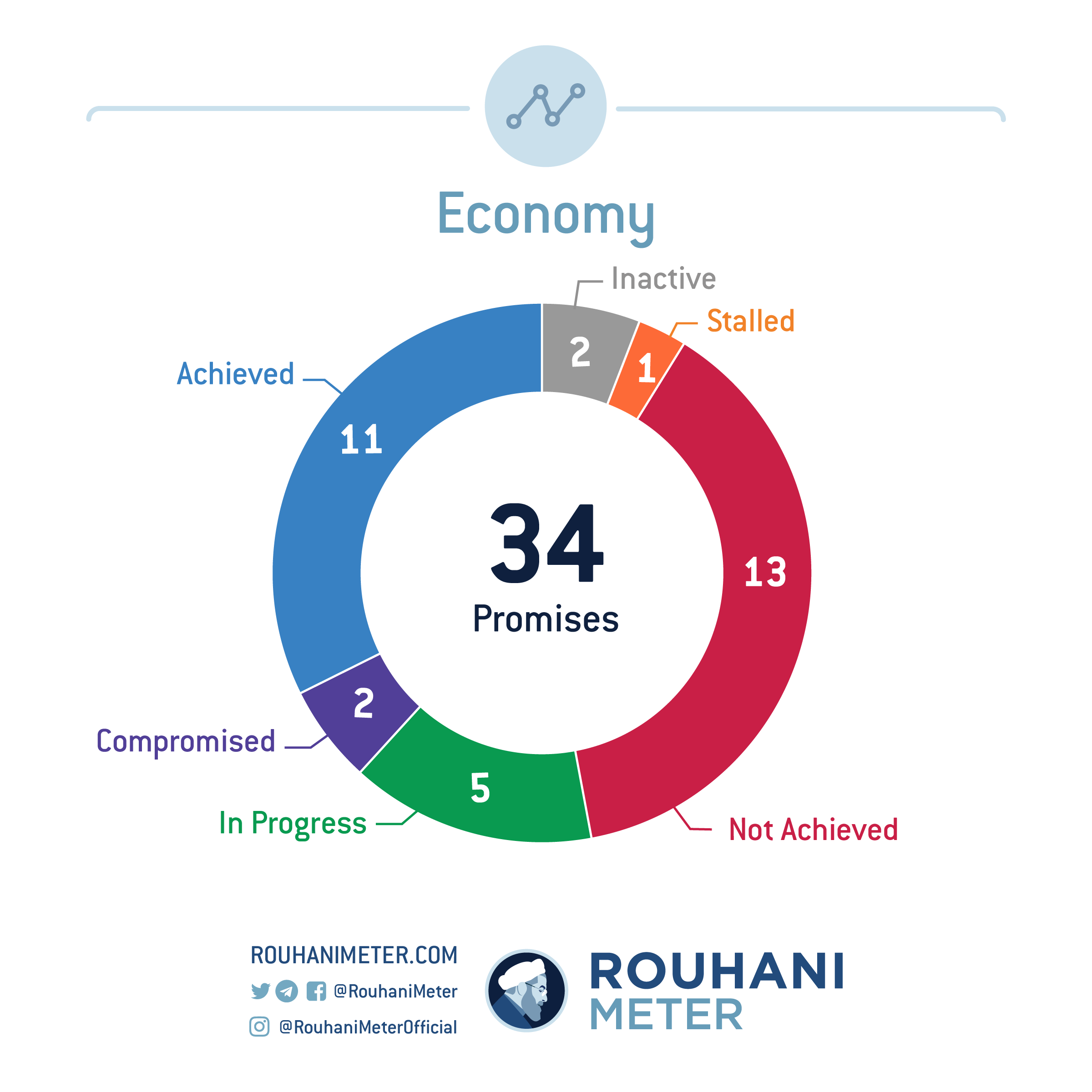 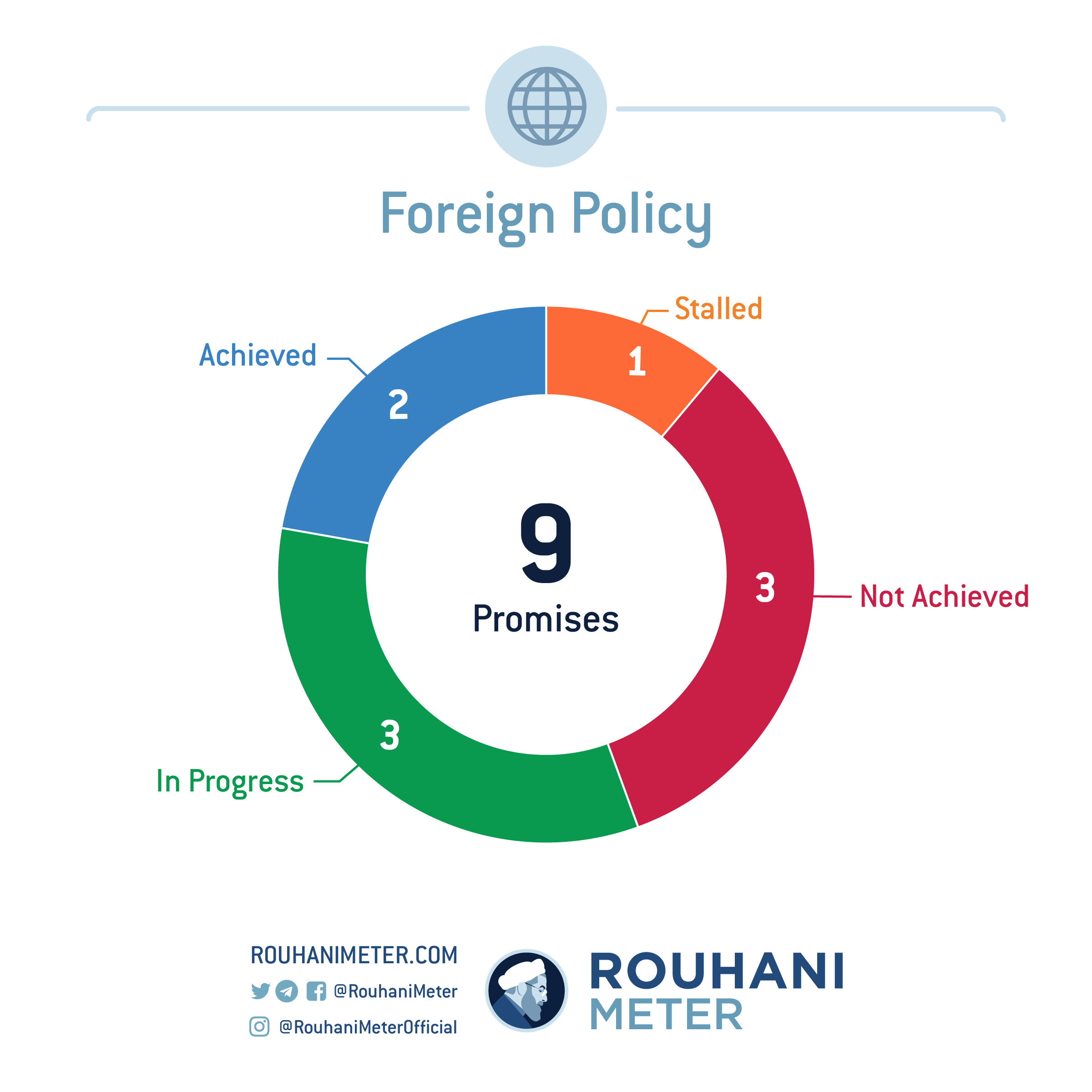